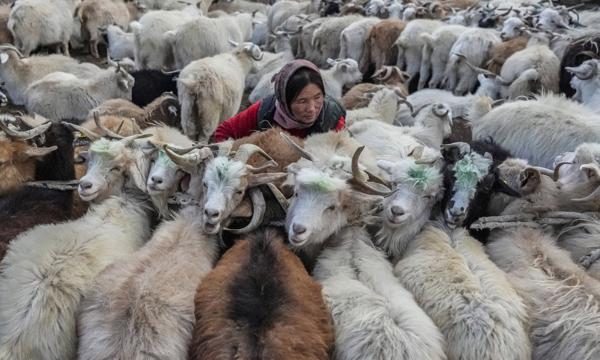 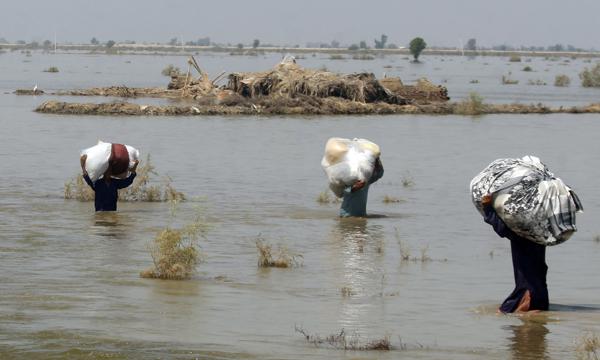 The latest news from The Associated Press on climate change, threats to biodiversity and renewable energies.

PORTLAND, Maine (AP) — Environmental groups are once again at odds with politicians and fishermen in New England in the wake of a decision by high-end retail giant Whole Foods to stop selling Maine lobster.

UN: Great Barrier Reef should be on heritage ‘danger’ list

PARIS (AP) — A United Nations-backed mission is recommending that the Great Barrier Reef be added to the list of endangered World Heritage sites, warning that without “ambitious, rapid and sustained” climate action the world’s largest coral reef is in peril.

LONDON (AP) — Prince William and the Princess of Wales will be looking to focus attention on their Earthshot Prize for environmental innovators when they make their first visit to the United States in eight years this week, a trip clouded by tensions with William's brother, Prince Harry, and his wife, Meghan, who have criticized Britain’s royal family in the American media.

Spotlight on illegal buildings as Ischia death toll now at 8

MILAN (AP) — The Italian resort island of Ischia has a long history of natural disasters, but experts say this weekend’s landslide that has killed eight people and left five missing was exacerbated by a combination of climate change and often-illegal excessive development.

Water levels in Zimbabwe’s biggest dam too low for power

HARARE, Zimbabwe (AP) — Electricity shortages that have been plaguing Zimbabwe are set to worsen after an authority that manages the country’s biggest dam said water levels are now too low to continue power generation activities.

PORTLAND, Maine (AP) — Maine’s highest court on Tuesday upheld the lease for small section of state land for a $1 billion electric transmission corridor, delivering a victory to the project's developers.

MADISON, Wis. (AP) — A federal judge has ordered energy company Enbridge Inc. and an American Indian tribe to come up with an emergency plan to prevent potential spills from an aging oil pipeline running across the tribe's reservation.

US bat species devastated by fungus now listed as endangered

TRAVERSE CITY, Mich. (AP) — The Biden administration declared the northern long-eared bat endangered on Tuesday in a last-ditch effort to save a species driven to the brink of extinction by white-nose syndrome, a fungal disease.

BERLIN (AP) — It is time for China to move away from massive lockdowns and toward a more targeted approach to COVID-19, the head of the International Monetary Fund said days after widespread protests broke out, a change that would ease the impact to a world economy already struggling with high inflation, an energy crisis and disrupted food supply.

ANCON, Panama (AP) — In a tropical forest beside the Panama Canal, two black-handed spider monkeys swing about their wire enclosure, balanced by their long tails. They arrived at this government rehabilitation center after environmental authorities seized them from people who had been keeping them as pets.

The men found on the Alithini II oil tanker at the Las Palmas port on Monday afternoon appeared to have symptoms of dehydration and hypothermia and were transferred to hospitals on the island for medical attention, according to Spain's Maritime Safety and Rescue Society.

Thrifting is hot, and Goodwill finds are cool again. But while we’re thrilled to find the perfect throwback tee for our own closet, gifting used goods still carries a stigma for some.

HOUSTON (AP) — Houston officials lifted an order Tuesday that had called for more than 2 million people in the nation's fourth-largest city to boil their tap water before drinking or using it.

The boil order had been in effect since Sunday, when a power outage at a purification plant caused pressure to drop.

EXPLAINER: What hazards are posed by Hawaii’s Mauna Loa?

Got a bucket? Speed up the composting process with bokashi

It’s no secret that the key to healthy plants is healthy soil, and the best way to improve soil is by incorporating compost, which can take up to a year to make.

Bokashi is a composting method that can speed that up.

Drying California lake to get $250M in US drought funding

HELENA, Mont. (AP) — A Montana judge said he would decide Tuesday whether to continue temporary limits he placed on wolf hunting or to restore quotas and hunting methods pending a trial over changes in the way the state estimates the size of the wolf population, which informs hunting quotas.

US rule would limit methane leaks from public lands drilling

WASHINGTON (AP) — The Interior Department on Monday proposed rules to limit methane leaks from oil and gas drilling on public lands, the latest action by the Biden administration to crack down on emissions of methane, a potent greenhouse gas that contributes significantly to global warming.

About 200 people rescued from ice chunk on Minnesota lake

The Beltrami County Sheriff’s Office said on its Facebook page that it got a 911 call about midday Monday from people who were ice fishing who reported that a large chunk of ice broke free from the shoreline, stranding about 100 people.

NASHVILLE, Tenn. (AP) — A Tennessee panel on Monday approved a $40 million state economic incentive for a company that plans to invest $3.2 billion to develop a cathode materials plant for electric vehicle batteries.

BERLIN (AP) — Scores of environmental groups issued a joint appeal Monday for the European Union to drop carbon removal methods from its climate plans, arguing that some of them rely on untested technology while others may not absorb as many greenhouse gas emissions as claimed.

It is the 11th case of the highly contagious avian influenza in Missouri this year, involving nearly 435,000 birds on six commercial farms and four backyard flocks, the Missouri Department of Agriculture said.

Pockets of shelling across Ukraine as wintry warfare looms

KHERSON, Ukraine (AP) — Russian forces struck eastern and southern Ukraine early Sunday as utility crews scrambled to restore power, water and heating with the onset of snow and frigid temperatures, while civilians continued to leave the southern city of Kherson because of the devastation wreaked by recent attacks and their fears of more ahead.

OMAHA, Neb. (AP) — Nebraska agriculture officials say another 1.8 million chickens must be killed after bird flu was found on a farm in the latest sign that the outbreak that has already prompted the slaughter of more than 50 million birds nationwide continues to spread.

PANAMA CITY (AP) — An international wildlife conference moved to enact some of the most significant protection for shark species targeted in the fin trade and scores of turtles, lizards and frogs whose numbers are being decimated by the pet trade.

VERONA, Italy (AP) — Early season merrymakers sipping mulled wine and shopping for holiday decorations packed the Verona Christmas market for its inaugural weekend. But beyond the wooden market stalls, the Italian city still has not decked out its granite-clad pedestrian streets with twinkling holiday lights as officials debate how bright to make the season during an energy crisis.

Officials at the Waste Isolation Pilot Plant made the announcement this week, saying the first containers of waste to be entombed in the new area came from Oak Ridge National Laboratory in Tennessee — one of the many labs and government sites across the country that package up waste and ship it to WIPP.

AL RAYYAN, Qatar (AP) — At a suburban park near Doha, the capital city of Qatar, cool air from vents in the ground blasted joggers on a November day that reached almost 32 degrees Celsius (90 degrees Fahrenheit).

PANAMA CITY (AP) — An international wildlife conference moved to enact some of the most significant protection for shark species targeted in the fin trade and scores of turtles, lizards and frogs whose numbers are being decimated by the pet trade.

ALBUQUERQUE, N.M. (AP) — The New Mexico Supreme Court is being asked to reconsider its decision allowing the state’s largest electric utility to delay issuing rate credits to customers that were prompted by the recent closure of one of the Southwest's largest coal-fired power plants.

BASS RIVER TOWNSHIP, N.J. (AP) — Up to 2.4 million trees would be cut down as part of a project to prevent major wildfires in a federally protected New Jersey forest heralded as a unique environmental treasure.

EU, US edging toward trade spat when both want unity instead

BRUSSELS (AP) — The European Union and the United States are treading precariously close to a major trans-Atlantic trade dispute at a time when the two Western giants want to show unity in the face of challenges from Russia and China.

Hundreds of activists, among them Greta Thunberg, marched through the Swedish capital to a court Friday to file a lawsuit against the Swedish state for what they say is insufficient climate action.

German news agency dpa quoted a spokesman for Berlin Brandenburg Airport saying that Thursday's incident was being reviewed to determine what further action may be required.

KYIV, Ukraine (AP) — Residents of Ukraine's bombed capital clutched empty bottles in search of water and crowded into cafés for power and warmth Thursday, switching defiantly into survival mode after new Russian missile strikes a day earlier plunged the city and much of the country into the dark.

COLUMBIA,, S.C. (AP) — Three coastal counties in South Carolina have been declared disaster areas from damage from this fall's Hurricane Ian, allowing people to get federal money for repairs and assistance.

BERLIN (AP) — Europe should be able to cope with the natural gas supply crunch in the coming months thanks to considerable reserves although the continent could face a bigger energy crisis next winter, the head of the International Energy Agency said Thursday.

In a statement, the governor said she was experiencing mild symptoms and was isolating.

PORTLAND, Ore. (AP) — Two of Oregon’s most economically disadvantaged and racially diverse communities — one in Portland and the other on the south coast — are getting a boost in their fight against air pollution.

LUSAIL, Qatar (AP) — Less than a month before it is set to host the World Cup final, Lusail City is oddly quiet.

RENO, Nev. (AP) — Conservationists have notified U.S. wildlife officials that they will sue over delinquent decisions related to protections for two rare fish species that are threatened by groundwater pumping in the drought-stricken West.

MONTROSE, Pa. (AP) — A plea hearing has been scheduled for next week in the long-running case of a natural gas driller facing felony charges over allegations it polluted the aquifer of a small Pennsylvania community 14 years ago.

Is Searcher Clade the most millennial dad in all of animated moviedom? He has that telltale hipster beard. A sensitive voice sorta like Jake Gyllenhaal. And he feeds his kid avocado toast, with an egg on top.

FREEPORT, Maine (AP) — Facial recognition technology is mostly associated with uses such as surveillance and the authentication of human faces, but scientists believe they've found a new use for it — saving seals.

RIO DE JANEIRO (AP) — Federal courts in Brazil have ordered a New Jersey-based fishing tourism company to leave a remote Indigenous area of the Amazon after prosecutors filed charges of operating without government authorization and manipulating Indigenous people, which is illegal in the country.

CHIBAYISH, Iraq (AP) — Abbas Hashem fixed his worried gaze on the horizon — the day was almost gone and still, there was no sign of the last of his water buffaloes. He knows that when his animals don't come back from roaming the marshes of this part of Iraq, they must be dead.

ADVERTISEMENT
All contents © copyright 2022 The Associated Press. All rights reserved.